Added 3 years ago by ava
151 Views
Sometimes referred to as Beriani or Biryani or Kachhi Biryani, this dish possibly is on the top of the list when it comes to most searched items on the Internet and it makes the grade for a reason. A meal in itself, this dish is not kidding when it is referred to as fit for a king.
Hyderabadi Dum Biryani or Hyderabadi Dum ka Biryani traces its roots back to what is known as Nizami food. It was a staple Khandaani dish that was found on the tables of Nizami banquets in the days of the spread of Mughal cuisine or what may be referred to as Deccan cuisine. Hyderabadi cuisine takes pride of place in Southern or South Central India.
I suspect mostly that it is because of its jovial people and I also suspect it is because my heart and my soul belongs to these vivacious people who simply make eating an art form. India shares some beautiful secrets with Pakistan and the rest of the volatile sub-continent.
The bone of contention that hit headlines a few years ago when it came to branding a type of scented and rich rice called Basmati rice. Basmati gives Biryani what Peat or Scottish water gives Scotch. They cannot exist without the other. Biryani derives from Berya which legend hands over to and Persian origins.
Berya indicated the virtue of frying or being slow roasted over fire. Between Basmati and Berya, this dish and its excruciating method of preparation have made Biryani a sought after dish. If there is one dish to die for in Indian cuisine, Biryani must make it to the top of the heap.
Biryani was arguably the confluence of Persian invaders, Muslim rule and Moghul infiltration of Deccani cuisine brought to the sub-continent as a result of wars, inter-marrying and sheer love of good food. Thanks to the Moghlai foodies, Biryani now is a household name and didn’t remain a secret of the Nizami kitchen Biryani can be made in two distinct ways and if you check with a connoisseur of Indian food you will know the passionate fellow from the fraud with the kitchen-geek talk.
When the fellow asks you what kind of Biryani do you prefer? You are wading into deep territory my friend – Kachhi Gosht ki Biryani and Pakki Biryani? Kisku kya maalum Miya? Oops, your Vah Chef is getting ahead of himself.
Subscribe to my YouTube channel for new fun recipes every week!
Follow me on:
Facebook -
Twitter -
Google Plus -
Reach Vahrehvah at Website - 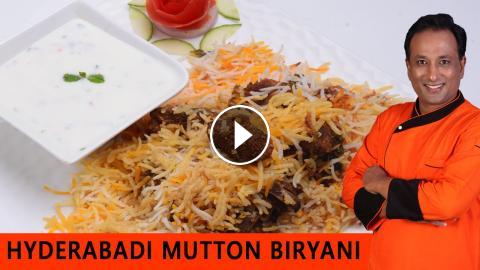 Sometimes referred to as Beriani or Biryani or Kachhi Biryani, this dish possibly is on the top of the list when it comes to most searched items on th...