Dhanush won our hearts with his performance in Raanjhanaa and the South superstar is now ready to take the world by storm. Dhanush is playing the lead role in The Extraordinary Journey Of The Fakir and it’s his first international film.

The trailer of the acclaimed film was unveiled today and it’s one interesting story. The movie revolves around Ajatshatru Lavash Patel (Dhanush), who turns into a street magician and trickster, after discovering that he is poor.

The street smart magician then heads to Paris and bumps into Marie Riviere (Erin Moriarty) in a furniture store. Though initially he tries to swindle her, he ultimately gets attracted to her and she also starts falling for him. However, life takes this fakir on an extraordinary journey. He travels to London in an IKEA wardrobe and from there he gets transported to Rome in a trunk. He then lands in Libya in a hot air balloon. This film looks like one hell of a ride. Dhanush is impressive as always and we are looking forward to watch this movie.

It will release on June 21. 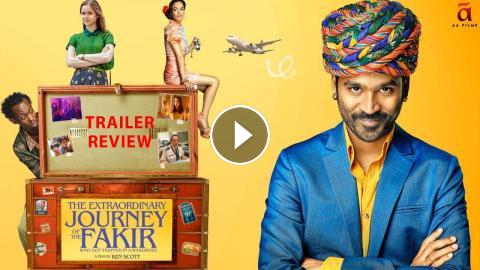 #TheExtraordinaryJourneyOfTheFakir #Dhanush #TrailerDhanush won our hearts with his performance in Raanjhanaa and the South superstar is now ready to ...