admin
The late Sridevi has been announced as the Best Actress posthumously for her role in revenge drama ‘Mom’ at the 65th National Film Awards.

When a leading online publication got in touch with her husband Boney Kapoor for his reaction to the news, the veteran producer could not hold back his tears. Kapoor was completely overwhelmed on hearing the news of the honour being given to Sridevi, who passed away on 24 February this year.

Boney expressed that he was totally overwhelmed and wished that Sridevi was there and that it was her first National award and many things came to mind.

Earlier Sridevi had won several Filmfare awards and was also honoured with the Padma Shri in 2013, this is her first national award. The actor’s unexpected demise on February 24 this year left everyone in a state of shock. Sridevi had an impressive repertoire of work which includes her memorable roles in Sadma (1983), Nagina (1986), Mr. India (1987), Chandni (1989), Chaalbaaz (1989), English Vinglish (2012) and many more.

We are quite sure fans of the legendary actress will be ecstatic about this piece of news! 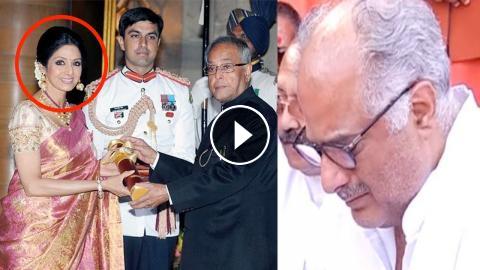 The late Sridevi has been announced as the Best Actress posthumously for her role in revenge drama ‘Mom’ at the 65th National Film Awards.When a leadi...