admin
This rare Qianlong-period bell was owned by one of the greatest collectors of the 20th century — William Randolph Hearst. Specialist Marco Almeida explains how and why it was made.
‘This is a magnificent example of an imperial work of art,’ states Marco Almeida, specialist in Chinese Ceramics and Works of Art at Christie’s in London. The bell was cast during the reign of the Qianlong Emperor, who reigned from 1736 to 1795 and was a renowned patron of the arts.
Cast gilt-bronze bells of this type were known as 'bianzhong' and were usually assembled in sets of 16, featuring 12 musical tones, with four repeated notes in lower or higher octaves. The bells would be arranged in tonal sequence in two rows of eight on a tall lacquered wooden frame, which was often decorated at either end with a dragon motif.
‘They were an essential part of Confucian rituals at the imperial altar,’ Almeida explains. Such bells were also used during state events, including ascension ceremonies when new emperors were enthroned, formal banquets and processions of the imperial guard.
--
Subscribe to Christie's YouTube:
Sign up to Christie's Weekly:
Follow Christie's on:
Facebook:
Twitter:
Instagram:
Pinterest: 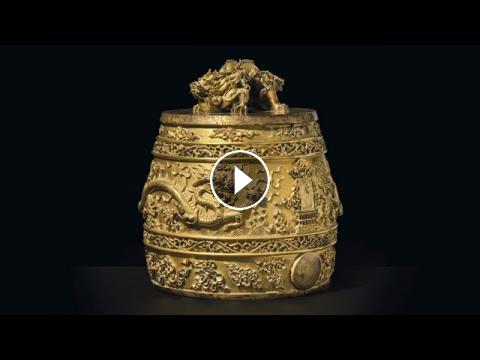 This rare Qianlong-period bell was owned by one of the greatest collectors of the 20th century — William Randolph Hearst. Specialist Marco Almeida exp...