admin
Megastar Salman Khan's Dabangg 3 goes on floors today in his hometown. Sonakshi Sinha will be seen opposite Salman Khan & the film is directed by Prabhu Deva

Taimur Ali Khan to make his debut with his mommy Kareena Kapoor Khan and the name of the film is Good News. Along with Bebo you will also see Akshay Kumar, Kiara Advani & Diljit Dosanjh in the film too.

Ranbir Kapoor & Alia Bhatt decide not to sign any films together until the Karan Johar’s produced Brahmastra completes. Apparently Alia & Ranbir will be shooting together for 150 days & wouldn't have the time for anything else

Ibrahim Ali Khan is all set to make his Bollywood debut & his father Saif Ali Khan seems to be producing it. Unlike Sara Ali Khan, Ibrahim will be needing some personal nurturing & grooming

Varun Dhawan's first choice for the remake of Coolie No.1 wasn't Sara Ali Khan but was Alia Bhatt. But Alia seems to have a busy schedule till the end of this year

Tiger Shroff & Shraddha Kapoor to shoot in 4 different countries for their film Baaghi 3. The locations include Morocco, Egypt, Serbia & Turkey 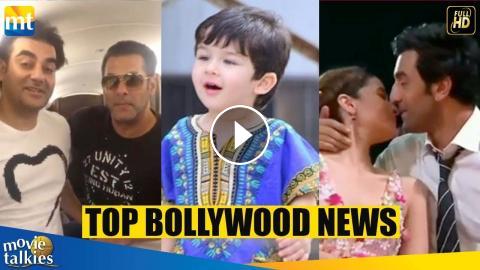 Megastar Salman Khan's Dabangg 3 goes on floors today in his hometown. Sonakshi Sinha will be seen opposite Salman Khan & the film is directed by Prab...