Added 3 years ago by admin
116 Views
In this Bollywood Hungama exclusive interview with Content Head Broadband Faridoon Shahryar, Sajid-Farhad talk about their film 'Housefull 3'. They explain why it was difficult to handle a successful franchise and also the challenge of taking over a franchise, whose previous parts were directed by Sajid Khan. They talk highly of Abhishek Bachchan and open up about the funny scene in the film where he is spotted clicking a selfie with Amitabh Bachchan's statue in Madame Tussauds. They then talk about the sizzling heroines in the film - Jacqueline Fernandez, Lisa Haydon and Nargis Fakhri. They break silence on the health issues faced by Nargis because of which she might give the promotions a miss. Sajid shares an interesting incident where he met Karan Johar at a party and in his feedback Karan told that he’ll see the movie for the SUPER-HOT trio of Jacqueline Fernandez, Nargis Fakhri and Lisa Haydon. The duo also clarifies why Nargis Fakhri isn’t more available to promote the film. Sajid talks in detail about the versatility of Akshay Kumar and mischievousness of Riteish Deshmukh. They also gets into a rapid fire mode and makes interesting comments about Akshay Kumar, Shah Rukh Khan, Riteish Deshmukh, Housefull franchise and much more.They’re the duo behind strings of super-successful films like Golmaal 3, Singham, Bol Bachchan and many others, but their latest writing venture ‘Dilwale’ wasn’t appreciated by critics and faced lukewarm response at box-office too. They open up on how they feel bad when their work is criticized. Sajid talks about how he along with Farhad started writing dialogues, and how Ram Gopal Verma was the man behind their inspiration for writing. He beautifully describes Rajkumar Hirani as a magician, and talks highly about him. Farhad reveals how the movie has been getting response from the people they’ve shown to yet. Sajid gets into a confusing circle when asked to choose the hottest among the hottest trio of Jacqueline Fernandez, Nargis Fakhri and Lisa Haydon. He remembers how Rajkumar Hirani made him act in 'Munnabhai MBBS', 'Lage Raho Munnabhai'. Must Watch!
Watch more Exclusive Celebrity Interviews right here
Like BollywoodHungama on Facebook:
Follow BollywoodHungama on Twitter:
Circle BollywoodHungama on G+: 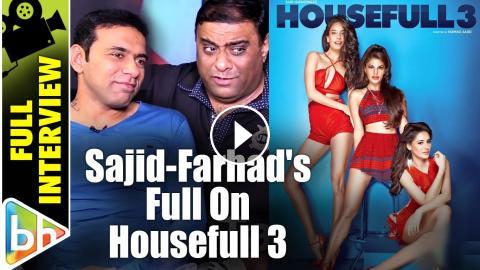 In this Bollywood Hungama exclusive interview with Content Head Broadband Faridoon Shahryar, Sajid-Farhad talk about their film 'Housefull 3'. They ex...