admin
Woahh! Ranbir Kapoor has totally transformed into Sanjay Dutt, and this visual is the biggest proof.
Looking at Ranbir, It feels like young Sanjay Dutt is back in action.
If sources are to be believed, Sanjay Dutt himself was shocked to see Ranbir’s transformation.
Right from beefing up his physique to nailing that signature ‘Sanjay style’ walk, it’s almost like Sanjay walking in Ranbir’s body. In fact, even those droopy eyes look so similar to Sanjay Dutt.
While initially most of us were doubtful about the fact if Ranbir will really be able to pull off a deadly character like Sanjay Dutt – will he look even half as close to Sanju baba’s personality.
And there, the Kapoor lad finally proves there definitely couldn’t have been a better choice than him to essay Sanjay Dutt’s role.
Directed by Rajkumar Hirani, the biopic will also star Dia Mirza as Sanjay’s wife Maanayata Dutt and Vicky Kaushal of Masaan fame will play Sanjay’s best friend.
For more on movies, fashion and entertainment stay tuned to movietalkies.com 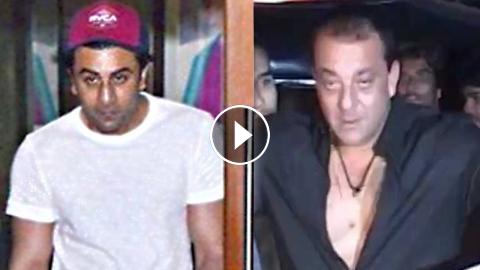 Woahh! Ranbir Kapoor has totally transformed into Sanjay Dutt, and this visual is the biggest proof.Looking at Ranbir, It feels like young Sanjay Dutt...