The trailer of Saif Ali Khan’s Laal Kaptaan impressed the hell out of cine lovers however, the film failed to create the same impact. Saif is playing a naga sadhu seeking revenge from a Pathan warlord Rehmat Khan in the Navdeep Singh-directed period drama. Why does he become a sadhu and why is he seeking revenge forms the rest of the plot.

The film is set in India of late 1700s. The Battle of Buxar has happened and the British East India Company is slowly tightening its grip around India. The premise is very fascinating and if you are interested in modern Indian history, you will certainly like this revenge drama.

However, the film has been dragged a lot and after some time, you lose patience. The story is unique but the execution could have been better. I wish director Sandeep Singh had paid more heed to the screenplay and the direction.

There are a lot of subplots and they magically disappear in between. The story meanders a lot and the film loses its track because of it, at several places. All the characters are half-baked and the writers have not even done justice to the protagonists or the antagonists.

Saif Ali Khan is convincing in his role. He has acted well in most parts of the film but he whimpers and seethes a lot and that looks quite unnecessary. The film falters at several places and Saif has saved many weak sequences with his performance. His look though is very quirky. It’s Pirates Of The Carribean meets naga sadhu and Saif has carried it with great élan. His kohl-rimmed eyes and dreadlocks make his character look even more intense. The action sequences too are superb.

Manav Vij has played Rehmat Khan but he is not as menacing as his character was supposed to be. Simone Singh has played his wife and she has just one angry expression throughout the film. Deepak Dobriyal has played a tracker and he is outstanding as always. He brings comic relief to the otherwise dark film and has utilized all the scope that his character gave him. Deepak’s character will remind you of Aamir Khan in Thugs Of Hindostan however, both Deepak’s character and the movie are much better than YRF’s disaster. The treatment of the film is very similar to that of Sushant Singh Rajput’s Sonchiriya.

Background score is energetic, cinematography could have been better, screenplay is quite a disappointment and dialogues are okay. I so wish this film had shown the lifestyle of naga sadhus in detail.

It was an interesting plot but execution wasn’t upto mark. Watch this film, to know about India's not so glorious past. 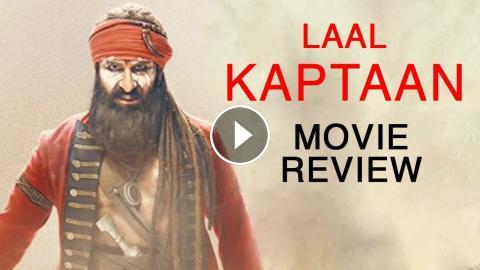 #Review #LaalKaptaan #SaifAliKhanThe trailer of Saif Ali Khan’s Laal Kaptaan impressed the hell out of cine lovers however, the film failed to create ...