admin
The film revolves around a girl called Akira jo apne baton se nahi apne hathon aur laton se zada baat karti hai. Trained in martial arts, Akira is sent to a remand home as a kid as she gets involved in an incident.


Badhey honey pe wo apni maa ke sath Jodhpur se apne bhai ke ghar Mumbai chali jaati hai for her higher studies. But the city of dreams throws more challenges at Akira, who somehow gets involved in a crime case involving some corrupt police officers. What is that case? How Akira gets involved and whether she manages to get out of it or not? To know all this my friends you’ll have to watch the movie.


Sonakshi is playing the titular role and though it’s good to see an actress beating the goons to a pulp and perform some high-octane action sequence, she fails to convince you. Sonakshi ek college student bilkul nahi lagti and kyunki unke character mein zada flavours nahi hai, as she is angry most of the times, her character looks boring.


But that has more to do with the script than her but overall she’s done a decent job. Lekin poori film mein wo kisi bhi situation mein ho kajal aankhon se ek baar bhi nahi hata and in the most trying situations, thodha sa smudhe hojatahai that’s it. And here I’m, still looking for an eyeliner that stays.


Anurag Kashyap has played a corrupt pothead ACP and trust me he is the best thing about this film. He is so menacing in the movie that you would love to hate him. Unki dialogue delivery se lekar unke care-a-damn attitude tak everything is bang on.


Surprisingly he has more screen space than Sonakshi and we are thankful for that. He is given such a good performance that I would definitely want to see him in more films in the future.


Konakana Sen Sharma is playing a pregnant senior police officer and though she is an acting powerhouse she didn’t have much to do in this movie. Lekin unka jitna bhi role tha usme unhoney acha kaam kia hai.


Amit Sadh and Rai Laxmi have very small roles in the movie and there’s not much to talk about it. Rest of the supporting cast too has done a decent job.


Now let’s talk about the film, Akira has novelty as we don’t really see women-oriented action films in Bollywood but that’s also its undoing as it tries too hard to become an action drama. Film mein twist and turns hai lekin wo bahut predictable hai.


Aisa lagta hai Anurag ke character ke alawa aur kisi character pe dhyan hi nahi dia gaya as there is neither any growth in them nor are they multi-faceted. This film is very stereotypical and full of clichés.


The film keeps you engaged in the first half, but towards the second half it becomes a total yawn fest. The screenplay gets very tedious and scenes are unnecessarily stretched. The climax too is very rushed and aisa lagta hai sab picture bana ke bore ho rahey they to jaldi jaldi mein climax nipta dia.


A.R.Murugadoss’ direction is decent but this film is no Ghajini or Holiday. This script needed more work aur screenplay aur crisp hona chahiye tha. There is one song in the movie and that’s pretty ok, back ground score too is avg.


So if you love watching action films this might be your cup of tea else you can give it a miss. But you can definitely watcg it for Anurag Kashyap’s amazing performance. I give this film a rating of 2.5 stars. 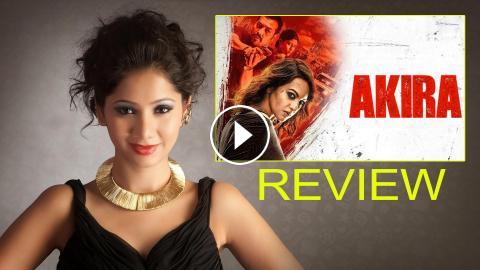