admin
Australia thrashed India by 5 wickets in the opening One-Day International of the five-match series at Perth on Tuesday. Chasing down India’s target of 310, it was George Bailey and Steven Smith who took charge for Australia. Although the debutant Barinder Sran gave India a flying start to their second innings, other Indian bowlers failed to make their bit of contribution. Sran dismissed Aaron Finch and David Warner in his consecutive overs, leaving Australia struggle at 21 for 2, needing another 289 from 45 overs.
The result might have gone India’s way had Bailey been adjudged caught behind on the very first ball that he faced. In the fifth over off Sran when he walked out to bat, the bowler sent the first delivery down the leg side which might have brushed Bailey’s gloves. India had appealed as well, but the umpire thought otherwise.
The 33-year-old made full use of the second life he earned in the match. He went on to score 112 off 137 balls before becoming Ashwin’s first wicket of the day. And the 242-run stand between Smith and Bailey eventually helped Australia register the third highest run chase in ODI cricket on the Australian soil.
Smith played the second fiddle until Bailey was on the other end. As soon as the latter walked back to the pavilion, Smith began his ruthless form against his favourite opponents. It was Smith’s 5th ODI against India and he already has two centuries against them.
The day began with a splendid Indian show. Rohit Sharma cracked a fabulous 171, studded with 13 boundaries and 7 sixes. He teamed up with Virat Kohli to add 207 runs, and missed out narrowly on breaking the highest partnership by an Indian pair for any wicket in Australia. The record stays with VVS Laxman and Yuvraj Singh, who added 213 runs against Australia at Sydney in January 2004. 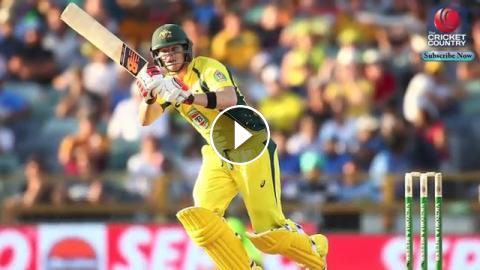 Australia thrashed India by 5 wickets in the opening One-Day International of the five-match series at Perth on Tuesday. Chasing down India’s target o...