admin
In this Bollywood Hungama Exclusive Interview with Content Head Broadband Faridoon Shahryar, the Darkhaast girl Erika Kaar talks about her debut bonanza 'Shivaay'. She talks about Darkhaast and how the song looks romantic on screen but was very tough to shoot. Ajay Devgn in a recent interview with Bollywood Hungama discussed how Erika 's no-makeup-look was something that he liked the most, and Erika further adds that how she isn't a heels, makeup, beautiful hair person. Erika says that she was not aware of Ajay Devgn kissing for the first time in his Bollywood career. She also reveals her real age which is quite shocking. Erika talks about her upcoming Hollywood film and how ‘Shivaay’ helped her to land a role in it. Game Of Thrones has amassed a huge fan following since past couple of years and Erika is one of those diehard fans of this American drama series. She opens up on how she almost landed a role in Game Of Thrones. Erika Kaar talks about her debut film, 'Shivaay'. She talks about her love for Bollywood and Shah Rukh Khan. Erika Kaar gets into the rapid fire mode and makes interesting comments on Deepika Padukone, Aishwarya Rai, Ajay Devgn, Game Of Thrones and a lot more. She answers few of the many fan questions asked by her fans from all over. She answers her favorite delicacy to make everyone mouth watery. She also reveals her working experience with Ajay Devgn. Must Watch!
Watch more Exclusive Celebrity Interviews right here
Like BollywoodHungama on Facebook:
Follow BollywoodHungama on Twitter:
Circle BollywoodHungama on G+: 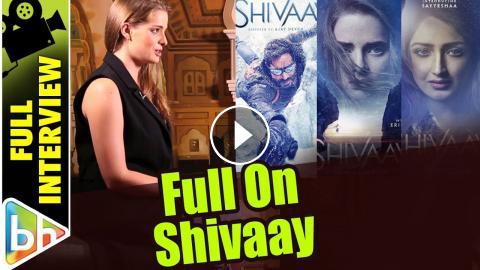