admin
In this Bollywood Hungama Exclusive Interview with Content Head Broadband, Faridoon Shahryar, Ajay Devgn talks about his upcoming film, ‘Shivaay’. Ajay Devgn talks about the father and daughter's relationship which the film will portray. Ajay Devgn compliments Abigail's performance who is playing a daughter's role in 'Shivaay'. He spills some beans on the duration of the film, the mind-blowing action sequences (Which we have just seen a trailer of), his sensuous moments on-screen and the talked-about music of the film. Ajay Devgn is known for emoting through eyes, and he explains this inbuilt gift of him. He also talks in detail about the cast of the film and how he took a decent amount of time to find them. Ajay Devgn bravely opens up about the people who're trying to divide the audience with religion. He beautifully explains his points about it. While answering fan questions, Ajay Devgn makes some interesting comments on 'Golmaal 3', Kajol, Abigail Eames, Parched and much more. Ajay Devgn also talks about his forthcoming films like Baadshaho, Golmaal 4, Sons Of Sardaar and much more. Must Watch!
Watch more Exclusive Celebrity Interviews right here
Like BollywoodHungama on Facebook:
Follow BollywoodHungama on Twitter:
Circle BollywoodHungama on G+: 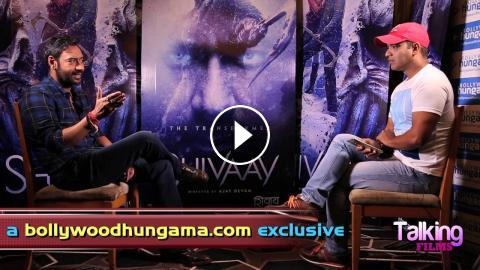