Ae Dil Hai Mushkil Or Shivaay; Your Choice For Diwali?

admin
Karan Johar in an exclusive interview from Dream Team with Faridoon Shahryar shared some interesting insights about his upcoming directorial venture ‘Ae Dil Hai Mushkil’. Starring Ranbir Kapoor, Aishwarya Rai Bachchan and Anushka Sharma in lead roles this film’s is already buzzing up the trade. Karan soared everyone’s excitement by revealing some interesting details about the music of the film. Even the King Khan, Shah Rukh Khan couldn’t control himself as he posted some awesome things about the music of the film. Ranbir Kapoor, though amassing a warm response on box-office was critically appreciated by many for his last outing ‘Tamasha’. On the other side, Ajay Devgn’s magnum opus Shivaay will lock horns with Ae Dil Hai Mushkil on this Diwali. The promo of Shivaay has been unanimously liked by one and all; but as Diwali is a celebratory period, will this dark-thriller witness firecrackers at the box-office? And with Karan Johar as a director and apparently having music that will breathe long, Ae Dil Hai Mushkil is a strong contender in this clash. Whatever the result maybe, the movie-goers will surely find it difficult to make their choice. Have you guys made yours? Do let us know!
Watch more Exclusive Celebrity Interviews right here
Like BollywoodHungama on Facebook:
Follow BollywoodHungama on Twitter:
Circle BollywoodHungama on G+:

Ae Dil Hai Mushkil Or Shivaay; Your Choice For Diwali? 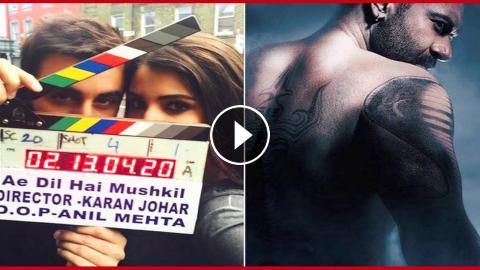 Karan Johar in an exclusive interview from Dream Team with Faridoon Shahryar shared some interesting insights about his upcoming directorial venture ‘...