What Is E-Bomb? Does India Have An E-Bomb (Electromagnetic Bomb)? Explained (Hindi)

An e-bomb (electromagnetic bomb) is a weapon that uses an intense electromagnetic field to create a brief pulse of energy that affects electronic circuitry without harming humans or buildings. At low levels, the pulse temporarily disables electronics systems; mid-range levels corrupt computer data. Very high levels completely destroy electronic circuitry, thus disabling any type of machine that uses electricity, including computers, radios, and ignition systems in vehicles. Although not directly lethal, an e-bomb would devastate any target that relies upon electricity: a category encompassing any potential military target and most civilian areas of the world as well.

The Defence Research and Development Organisation (DRDO) is developing an E-bomb which will emit electromagnetic shock waves that destroy electronic circuits and communication networks of enemy forces, its chief and scientific advisor to the defence minister Avinash Chander said in 2013.

▶ Points Covered :
- What Is A E-Bomb?
- E-Bomb Vs Nuclear Bomb?
- Does Indian Have A E-Bomb (Electromagnetic Bomb) ?

We have compiled data from the Internet to find out about What Is E-Bomb (Electromagnetic Bomb)? Does India Have An E-Bomb? Join us as we take a closer look at all about E-Bomb!

What Is E-Bomb? Does India Have An E-Bomb (Electromagnetic Bomb)? Explained (Hindi) 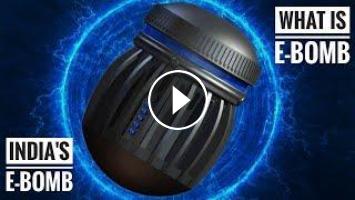