admin
When Steven Spielberg completed the film adaptation of the novel 'The Color Purple' in 1985 he gifted its author, Alice Walker, a painting titled 'Man on White, Woman on Red' by the African-American artist Bill Traylor. ‘He was hopeful (he said with a smile) that when I saw the film, I wouldn’t feel like the angry Woman on Red,’ says Walker. ‘I answered (with a laugh), “I hope so too.”’
Cara Zimmerman, a Christie’s specialist in Outsider Art, explains that the painting Spielberg gave Walker was significant. ‘There is an interesting conversation between 'The Color Purple' and Traylor’s art because both consider a similar moment in American history — hers looking back, his from a contemporaneous perspective,’ she says.
Walker knew artists like Traylor in her childhood. ‘I like folk art. And admire folk artists like Bill Traylor,’ she says. ‘Growing up in Georgia, I knew such an artist. With no education and no art instruction, Jimmy Lee Brundage created moving depictions of blacks and whites. And trees and animals. He was my introduction to the power of art to reach everyone.
When Zimmerman removed 'Man on White, Woman on Red', from its frame, she discovered another painting of a man and a dog on the reverse. ‘The work is unique in this respect,’ she says, ‘and presents us with another intriguing story.’ The painting is now titled 'Man on White, Woman on Red/Man with Black Dog' (double-sided).
Find out more: 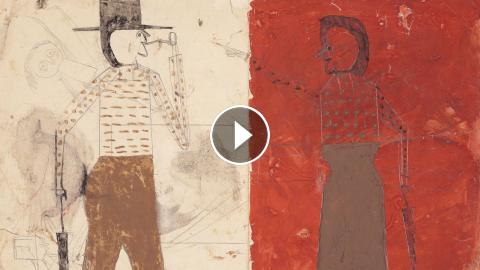 When Steven Spielberg completed the film adaptation of the novel 'The Color Purple' in 1985 he gifted its author, Alice Walker, a painting titled 'Man...