admin
Syrian artist Sara Shamma invites us into her London studio to talk about her creative process, recent upheaval, and why she likes to see in double.
The sun is very sharp here,’ observes Sara Shamma. ‘The way it hits your eyes is unexpected and transforms the way I see things.’
In our short film, the Syrian artist is standing in her light-filled studio in Dulwich and reflecting on how her paintings have changed since moving to South London three years ago. ‘I’ve started using blue and green in a big way – cool colours – less of the warm reds and browns that perhaps came from my country.’
In 2012, a year after the civil war began, Shamma and her young family left Damascus for Lebanon. ‘It was a difficult time,’ she says with characteristic understatement –particularly as her husband, who was CEO of a big logistics company stayed behind in Syria, intrepidly crossing the border each weekend to visit them.
She put her dislocation and fear into her paintings, creating the monumental work Q, an extraordinary frieze of distended and deformed people, animals and birds waiting in line. Disturbingly Kafkaesque in appearance, it caught the attention of the press when it was exhibited at the Royal College in London in 2013 with Shami Chakrabarti saying ‘the pain is put to great effect… and proves that it is art and culture that changes the world.’
Find out more:
--
Subscribe to Christie's YouTube:
Sign up to Christie's Weekly:
Follow Christie's on:
Facebook:
Twitter:
Instagram:
Pinterest: 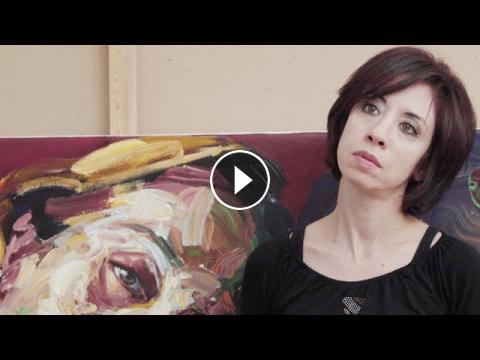 Syrian artist Sara Shamma invites us into her London studio to talk about her creative process, recent upheaval, and why she likes to see in double.Th...