Wagah is a 2016 Indian Tamil action romance film written and directed by G. N. R. Kumaravelan. The film features Vikram Prabhu and Ranya Rao in the leading roles, while D. Imman composes the soundtrack. After beginning pre-production in November 2013, the film released in August 2016. The film received negative reviews and bombed miserably at the box office.

The movie begins with the news announcement of the decapitation of two BSF jawans by the Pakistan Army and a third jawan Vasu (Vikram Prabhu) missing. The scene then shifts to a Pakistan Army base where a wounded Vasu is held prisoner. He narrates the events leading to his imprisonment.

Vasu, who is from a small town in Tamil Nadu, joined the BSF after his graduation to avoid working in his father's (Raj Kapoor) provision store and was posted at the India-Pakistan border in Jammu and Kashmir. One day, he encountered a young Kashmiri Muslim girl Khanum (Ranya Rao) and immediately got attracted to her. After some days, Khanum reciprocated Vasu's feelings, but sadly walked away when Vasu asked her to marry him. The next morning, two jawans were decapitated by the Pakistan Army (which was reported at the beginning of the film), forcing all Pakistanis in Kashmir to return to Pakistan due to rising anti-Pakistan sentiment. Vasu, who was tasked with the responsibility to ensure that all Pakistanis returned safely, was shocked when he found out that Khanum is a Pakistani from Pakistan-occupied Kashmir, who had come to India to visit her grandfather. Later, the bus in which Khanum was travelling was burnt by protestors just a few kilometres from the border, however Khanum managed to survive. Vasu took her to her home in PoK safely via an unguarded border crossing, but was soon caught by the Pakistan Army for infiltrating into their country and imprisoned.

In the present day, Vasu finds out that along with him, twenty-three other BSF jawans are held prisoner by the Pakistan Army. One day, he is made to fight one of the imprisoned BSF jawans (Ajay Rathnam). He manages to defeat the jawan, but is then taken to a nearby cliff by the Pakistan Army to be shot. However, a sympathetic Pakistan Army officer, whose daughter's illness was successfully treated by Indian doctors, secretly allows him to escape. Vasu goes to Khanum's village, where he witnesses Khanum's family being killed by a cruel anti-Indian Pakistan Army commander Razzaq Ali Khan (Shaji Chaudhary), who feels that Khanum is a traitor for loving the Indian Vasu. Vasu rescues Khanum and both of them leave for the Indian border, with Razzaq and the Pakistan Army in pursuit. He manages to subdue the armymen as well as Razzaq, but chooses not to kill Razzaq. Razzaq, while accepting defeat, reveals that his opinion of India and Indians will not change. At this, Vasu forcefully replies that despite being an Indian, he does not hate Pakistan and Pakistanis and that the misguided hatred between the two countries only aggravates the India-Pakistan conflict.

The movie ends with Vasu revealing the presence of the twenty-three jawans in Pakistan and ensuring their freedom, for which he is honoured by the President as well as the Prime Minister of India. 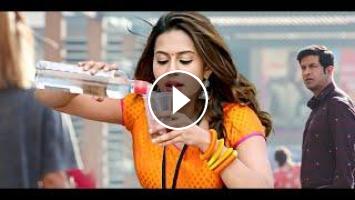