admin
Babloo is a happy-go-lucky guy who likes to have fun with his friends and always gets into trouble. So his father Narayana Rao gets him a job with Shanker Goud, a local mafia head don leader. Shanker Goud and Bhallu, a dreaded local goon are rivals and Bhallu is determined to kill Shanker Goud's sister Pooja to avenge his brother death because he murdered the couple and now he is killed by Shanker Goud. Babloo falls in love with Pooja but Shanker is planning an arranged marriage for her with Ajay, an NRI doctor. Babloo and Pooja elope to get married. Babloo saves Pooja from Bhallu. The rest of the story how Babloo marries Pooja and how Shanker Goud finish Bhallu to protect his sister.
In the end, Babloo lets Ajay marries another girl and Ajay agrees and goes back to USA. When Shankar Goud finds out that Babloo and Pooja fal in love with each other. Shankar badly beats Babloo with his henchmen. Sriragnam Sheshadri Chary, one of Shankar's employees calls Narayana that his Shankar is trying to kill his son. Narayana cames and tells the goons to let Babloo go. One of his Shanker Goud's henchmen who is also his right hand wants to marry Pooja because she doesn't want to marry Ajay. Shanker Goud fires Babloo tells him to never come back because he thinks Babloo and Pooja fell in love with each other. On the way to the wedding, one of Bhallu's henchmen blocks 5 cars of Shanker Goud's henchmen and now Shanker Goud, Pooja, and Brahmaji are trapped. When Bhallu and his henchmen are here. Brahmaji gives Shanker Goud a gun to shoot him and he does. However, the gun doesn't have bullets and Shanker is shocked to see Brahmaji is working for Bhallu all along. Bhallu tricks Shanker and according to his plan, he planned an arranged marriage with Pooja and Brahmaji; if he could marry Pooja, Bhallu will leave her alone, if not, Bhallu will kill Pooja for good. Shanker, in a fit or rage, kills almost all of Bhallu's henchmen, including Brahmaji, but he is brutally injured and Bhallu finally kidnaps Pooja.
Chary knows about this and tells Babloo that Shanker is injured and Pooja is abducted by Bhallu. Bhallu calls Shanker on the phone and tells them that he'll kill Pooja if he doesn't rescue his sister in 3 hours. Shanker tells Babloo that Babloo could marry Pooja if he kills all of Bhallu's henchmen; he agrees. Shanker and Babloo finds out that Pooja is held captive in almost abandoned building. Babloo fights Bhallu's henchmen while Shanker Goud fights Bhallu; Shanker Goud finally defeats Bhallu. The film ends with Shanker Goud lets Pooja marry Babloo and they did and Pooja gives birth to a first child. 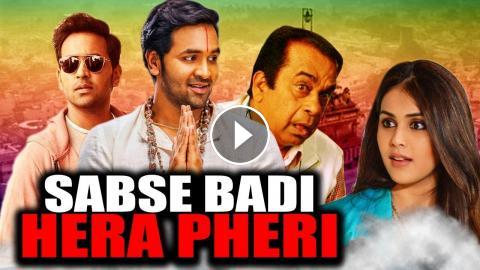 Babloo is a happy-go-lucky guy who likes to have fun with his friends and always gets into trouble. So his father Narayana Rao gets him a job with Sha...