The wait is finally over as the teaser of Prabhas’ much-awaited film Saaho has been unveiled. Prabhas is marking his Bollywood debut with Saaho.

While the story of the movie hasn’t been unveiled in the teaser, it does have action galore. Prabhas will be seen romancing Shraddha Kapoor in the actioner and they have a few scenes together in the teaser. From hand-to-hand combats to the use of weapons of mass destruction, the makers have left no stone unturned to make it India’s biggest action-thriller ever.

The movie also stars Mahesh Manjrekar, Neil Nitin Mukesh, Jackie Shroff, Chunky Pandey and Mandira Bedi among others. While the teaser begins with Prabhas committing to Shraddha, it ends with his lady love asking him why they are being hounded by armed men. To her question he replies, “Fans.” When she asks why are they so violent, he says, “Die-hard fans.” Not only Prabhas, Shraddha too is seen performing some high-octane stunts in the teaser. Now we are eagerly waiting to see the trailer of Saaho.

Directed by Sujeeth, Saaho was shot simultaneously in Hindi, Telugu, Tamil and Malayalam and it will hit the screens on August 15. 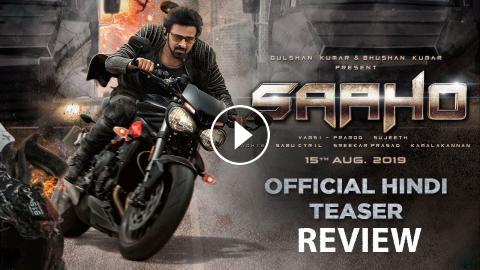 #saaho #teaser #prabhasThe wait is finally over as the teaser of Prabhas’ much-awaited film Saaho has been unveiled. Prabhas is marking his Bollywood ...