admin
Amitabh Bachchan, Irrfan Khan, Deepika Padukone starrer 'Piku' is a simple story of a young woman who lives with her father in New Delhi. The story follows the three characters on a road trip to Kolkata, to visit Amitabh Bachchan aka Bhaskor Bannerjee's ancestral home. Big B's performance in this film is being considered as one of the best that he has ever given so far. Irrfan Khan and Deepika Padukone, both very good actors, have given a great performance in the film. The film's story and screenplay have been written by Juhi Chaturvedi, and Shoojit Sircar's ace direction along with high-level of technical prowess makes the film a great watch. The box office opening hasn't been very big for the film as it is one meant for the class audience residing in the cities and will not appeal to the audience in the smaller centres.
Sunny Leone, Ram Kapoor starrer, 'Kuch Kuch Locha Hai' also released this Friday and is based on the novel, 'Babachi Girlfriend' and is an adapted screenplay. The story is very childish due to the ineffective dialogues. Mr. Komal Nahta says that Ram Kapoor's talent is wasted in the film as he is a well-known TV actor. Sunny Leone is just meant to look sexy in the film and she does that well. The other actors are no good in the film. The songs and music is the only silver lining in the film. The film will fail to make an impact at the box office and hasn't opened well at the various centres. 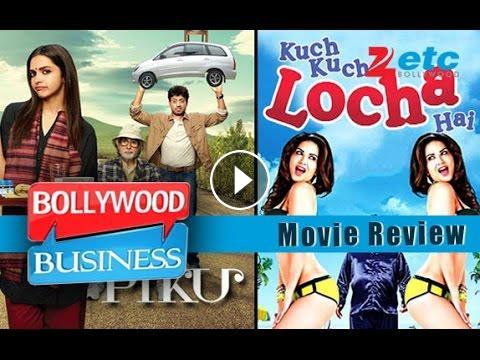 Amitabh Bachchan, Irrfan Khan, Deepika Padukone starrer 'Piku' is a simple story of a young woman who lives with her father in New Delhi. The story fo...