admin
Sanjay Dutt and his wife Maanayata Dutt's love story is very interesting. It is a well-known fact that Sanjay had dated many women and had many affairs before Maanayata came in his life.

As per buzz, Sanjay Dutt was involved with a junior artist, Nadia Durrani when he first met Maanayata who was then known as Dilnawaz Shaikh. Maanayata was already a divorcee at the time and Dutt discovered that Nadia and Maanayata were poles apart.

While Nadia enjoyed the luxuries that came with Dutt's presence, Maanayata was more interested in cooking for Sanjay. As the age-old saying goes that 'the way to a man's heart goes through his stomach' -it was finally Maanayata who ruled over Sanju Baba's heart.

Maanayata would often drop by on the sets of his films with his favourite dishes and soon stated taking care of his personal and professional matters too. Not only this, she was always comfortable with his friends and this warmth attracted Sanjay towards her.

Prior to her relationship with Dutt, Maanayata already had a first marriage behind her. She had worked in a few inconsequential films and had also done an item number in Gangaajal. After Maanayata met Sanjay Dutt and got involved with him, she decided to leave her dream of acting.

After a 2-year courtship, Maanayata and Sanjay made their love official by tying the knot at the Taj Exotica in Goa on February 7, 2008, in accordance with Hindu rituals. Many theories surfaced when this news came out in the public. But, after seeing the smiles on the faces of the newlyweds, everyone congratulated the couple.

As per buzz, when Sanjay and Maanayata tied the knot, Sanjay's sisters neither attended their wedding nor accepted Maanayata as their bhabhi. But over the years, things have changed and Maanayata now enjoys cordial relations with her nanads. As they say, all's well that ends well!

2 years after their marriage, the couple welcomed their beautiful twins, Shahraan and Iqra Dutt on October 21, 2010.

Sanjay and Maanayata's love story may have seen a lot of ups and downs, but their love and unbending dedication for each other have surpassed all barriers. Their love story is truly inspiring. 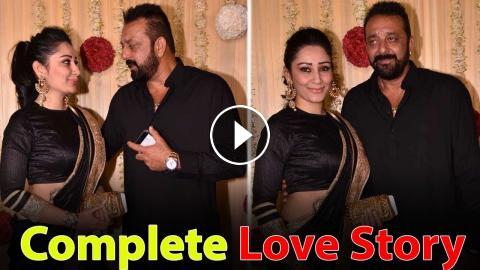 Sanjay Dutt and his wife Maanayata Dutt's love story is very interesting. It is a well-known fact that Sanjay had dated many women and had many affair...