ava
Defending champions India started their FIH Men's Junior Hockey World Cup 2021 campaign with a shocking 4-5 defeat against France at the Kalinga Stadium in Bhubaneshwar. France's skipper Timothy Clement scored a hattrick in the 1st, 23rd, and 32nd minutes. Benjamin Marque and Corentin Sellier scored a goal apiece as France scripted history in the tournament. Vice-captain Sanjay scored a hattrick for the hosts in 15th, 57th, and 58th minutes. Uttam Singh was another goal scorer for India.

The FIH Odisha Hockey Men's Junior World Cup Bhubaneswar 2021 will be the 12th edition of the biggest tournament in U-21 Men's Hockey. This is the third consecutive time that India is hosting the prestigious tournament, which took place in New Delhi in 2013 and in Lucknow in 2016. A total of sixteen nations will take part. Hosts and defending champions India are grouped in pool B along with Canada, France and Poland. The other teams in the fray include Belgium, Malaysia, South Africa and Chile in pool A, Netherlands, Spain, Korea and United States grouped in pool C while Germany, Argentina, Pakistan and Egypt in Pool D.

Each team is set to play three matches during the league stage over a period of five days. This will be followed by a series of cross-over matches, due to take place on 30 November, followed by knockout matches from 1 December, with a final to decide the champions scheduled for 5 December. 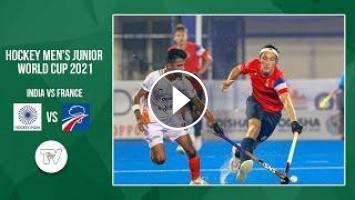