admin
In this Bollywood Hungama exclusive interview with Content Head Broadband Faridoon Shahryar, the singer-composer-actor Himesh Reshammiya talks about his upcoming film 'Teraa Surroor'. When you have actors like Naseeruddin Shah, Kabir Bedi, Shekhar Kapur in your cast list you don't have to ask for more. Himesh talks about this amazing cast in the film. Be it 'Aap Ka Surroor', 'Expose', Himesh has been extra cautious regarding the budget of the film. He discusses in detail about the economies of the film. There is a rarity to see a commercial film in a sensible zone, and Himesh explains how 'Teraa Surroor' is in that zone. He also remembers 'Expose' and labels it as an upmarket film. He talks about the intriguing factor of the film and how audience will be glued to their seats from the first frame. He opens up about the music of 'Sanam Teri Kasam' and reveals that it was a challenge for him. He also remembers 'Prem Ratan Dhan Payo' and talks about how everything with Salman Khan works. He also gets into a rapid fire mode and makes interesting comments on Arijit Singh, Kishore Kumar, Pritam, Imtiaz Ali, Salman Khan, Shah Rukh Khan, Deepika Padukone and a lot more. He answers few of the many questions asked by his fans from all over. The track 'Teri Yaad' has the nostalgia of Himesh's nasal singing in it and Himesh dedicate this song to his fans. He then talks about his first step with being Salman Khan on his side. The trend of singles is high these days and Himesh reveals he'll be seen doing a lot singles this year. Remember Deepika Padukone in 'Naam Hai Tera'? Himesh hopes her luck to get rubbed on Farah Karimi as she's also a 'Surroor Girl'. Must Watch!
Watch more Exclusive Celebrity Interviews right here
Like BollywoodHungama on Facebook:
Follow BollywoodHungama on Twitter:
Circle BollywoodHungama on G+: 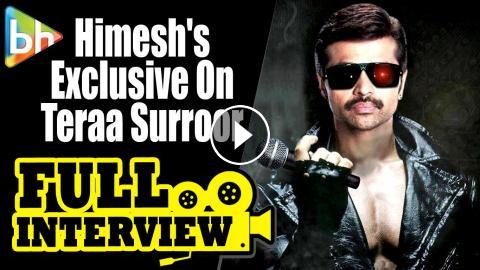