admin
In this Bollywood Hungama exclusive interview with Content Head Broadband Faridoon Shahryar, Farhan Akhtar and Aditi Rao Hydari talk about their film 'Wazir'. Farhan refuses to comment on reports of whether Rajkumar Hirani has suggested changes during the editing process of the film. He and Aditi speak about how they prepared for a key challenging sequence in the film. Aditi tells how she used to love observing Farhan and Amitabh Bachchan perform. Farhan explains how he got more time to spend and interact with Big B on 'Wazir' sets than on the sets of his second directorial venture 'Lakshya'. Both then speak about the slow motion bit used in the song 'Tere Bin'. Farhan admits that it's unfortunate when people's intentions get questioned and even get misquoted as it happened in the case of Shah Rukh and Aamir Khan recently. He then revealed whether he feels that troublemakers might create problem for 'Raees' since it stars a Pakistani actress, Mahira Khan. They then get into rapid fire mode and make interesting comments on 'Wazir', 'Zindagi Na Milegi Dobara', Amitabh Bachchan, Mahesh Bhatt, Censor Board and a lot more. Must Watch!
Watch more Exclusive Celebrity Interviews right here
Like BollywoodHungama on Facebook:
Follow BollywoodHungama on Twitter:
Circle BollywoodHungama on G+: 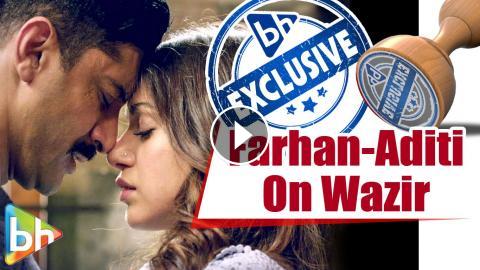