admin
Sister Gertrude Morgan expressed God’s message through art and song, and won admirers ranging from Andy Warhol to actor Robert Duvall.
Following a series of divine revelations in 1957, Sister Gertrude Morgan (1900–1980) began to paint. ‘Jesus just took my hand,’ she maintained. For the next 16 years, the self-styled ‘Bride of Christ and housekeeper for Dada God’, who dressed only in a white nurse’s uniform, imparted her ecstatic visions of a New Jerusalem on old scraps of cardboard and paper.
Sister Gertrude’s communications with God had in fact begun some 20 years earlier in the 1930s, when the Lord had impelled her to leave her husband of 10 years, and her home in Columbus, Georgia, to travel the southern states of America spreading the gospel through prayer and song.
Such a subversive, radical act by a black married woman was unheard of at the time. ‘Just be sure and give Jesus credit for what I do,’ she said in an interview in 1973. ‘He’s the one that deserves all the praise. He’s the one that made me do it.’
In 1939, she settled in New Orleans — ‘the headquarters of sin’ — where she became a fixture in the French Quarter, jangling her tambourine and exhorting the public to ‘wake up and hear about Jesus’.
Find out more:
-- 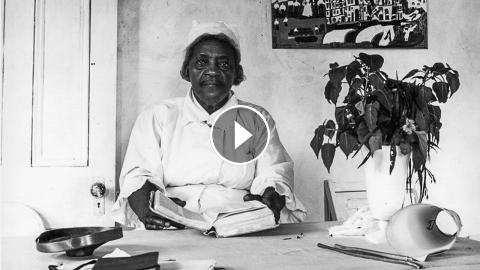