admin
Art collector Christian Levett shows us around his Mougins Museum and explains how he scratches his collecting itch.
Introducing the medieval village of Mougins, a 20-minute drive from Cannes in the south of France, the British art collector Christian Levett explains that artists have been drawn to the region for centuries because of its brilliant light.
Mougins is where Levett has been spending time for the last 13 years. In 2009, the investment manager from London bought a holiday home in the village, then built the Mougins Museum of Classical Art to house the thousands of Greek, Roman and Egyptian artefacts he had been fastidiously collecting for years.
‘I think I have always been a natural collector. I collected coins and First and Second World War campaign medals as a child, and as I got into my twenties, I started collecting English medieval and Roman coins, and then I started buying artworks in my mid-twenties,’ Levett explains in our film. ‘Then I discovered the antiquities market.’
It was about 20 years ago when, out of nothing but curiosity, Levett ticked the box marked ‘antiquities’ on an auction house catalogue request form. ‘It struck me as unbelievable, absolutely mind-blowing, that you could buy ancient armour and classical marble sculptures,’ he told Christie’s Magazine in 2016. ‘And it all seemed so amazingly cheap compared with practically everything else.’
Levett is the first to admit that he became fanatical about the world of antiquities. As well as acquiring Minerva (a classical archaeology magazine) and funding excavations in Egypt, Italy, England and Spain, he would also leave dozens of absentee bids at antiquities auctions – sometimes buying up to 20 lots per sale.
Within a decade he had acquired more than 1,000 pieces, and soon realised he needed to invest in more infrastructure; larger storage, climate controls and a curator. The result was the Mougins Museum.
Find out more:
--
Subscribe to Christie's YouTube:
Sign up to Christie's Weekly:
Follow Christie's on:
Facebook:
Twitter:
Instagram:
Pinterest: 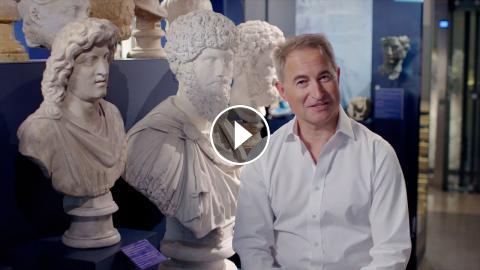 Art collector Christian Levett shows us around his Mougins Museum and explains how he scratches his collecting itch.Introducing the medieval village o...