ava
Foodworks,
Chicken Tikka Masala, the world famous chicken tikka masala sounds very Indian recipe, but chicken tikka masala was first served in Glasgow, Scotland by a Bangladeshi chef. Originally chicken tikka was served (chargrilled in a tandoor) dry, and the chef received the compliant it was dry. So he made with creamy curry sauce to appease the customer! That's the story in nutshell.

However, the recipe is almost very similar to butter chicken masala, in Punjabi Murgh Makhani, a popular Punjabi chicken recipe, but simple to prepare. Proper Chicken Tikka Masala served in United Kingdom is slightly different than the one I shared here. This chicken tikka masala recipe was intent to recreate the one served Indian restaurants.

In first step, chicken marinated with simple ingredients yogurt or curd, Kashmiri chili, cumin powder and other Indian spices. Later the marinated chicken chargrilled in Tandoor, but I don’t have a tandoor in my kitchen. So pan seared with butter to replicate the flavor of original chicken tikka masala recipe. 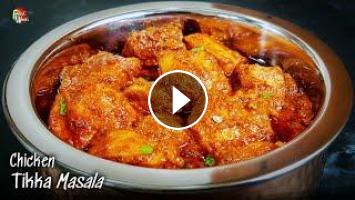