Added 1 year ago by admin
90 Views
After receiving accolades galore for Jodhaa Akbar, ace filmmaker, Ashutosh Gowariker is back with another historical drama and while the Hrithik Roshan–Aishwarya Rai Bachchan starrer was, at its core, a love saga, his next venture, Panipat, will explore the battle which changed the course of Indian history.

Panipat stars Arjun Kapoor, Sanjay Dutt and Kriti Sanon in the lead roles and the makers unveiled the teaser poster of their much-anticipated movie today along with the release date. The film, which is based on the Third Battle of Panipat, will hit the theaters on December 6, 2019.

The teaser poster sets the mood right for the gory drama and has left us awe-struck with its sheer grandeur and after seeing it, one can only imagine the scale on which Ashutosh will mount his ambitious project.

The poster shows just one hand of a warrior holding his sword firmly on the battleground, as one of the most eventful and bloodiest battles ensues in the backdrop. The battle was fought between the Durrani and the Maratha Empire and hence one can see both, saffron and green flags. From the poster, it seems that the war drama will tell the story of Maratha valour however, it will also tell the tale of ‘The Great Betrayal’, which resulted in their catastrophic defeat.

Since military tactics, artillery’s and cavalry were the highlights of the battle, the teaser poster hits the bullseye. The cool metal of the meticulously designed sword is starkly juxtaposed with the bright canvas, with blazing embers flying all over and it will remind you of the history chapter that talked about the deadly battle, which registered the largest number of fatalities in a single day.

Reportedly, Arjun is essaying the role of Sadashiv Rao Bhau aka Bhausaheb, the Commander-in-Chief of the Maratha Army and Sanjay is playing Ahmad Shah Abdali, the founder of the Durrani Empire.

Directed by Ashutosh Gowariker, the film is being produced by Sunita Gowariker and Rohit Shelatkar and is slated to release on December 6, 2019. 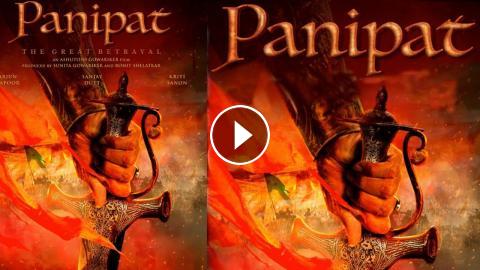 After receiving accolades galore for Jodhaa Akbar, ace filmmaker, Ashutosh Gowariker is back with another historical drama and while the Hrithik Rosha...