admin
Brush up your 'English Verbs' - Learn forms of verbs quickly ( Basic English Grammar Lesson)
In this English Grammar lesson you will learn what a verb is and also about various forms of verbs.
Facebook :
Website :
What is a verb?
A verb is an action word. It indicates the action in the present, past and future tenses. When we use a verb, we have to say who or what is doing the action. This ‘who or what’ is the subject of the verb.
With the subjects: I, you, we, they – do not add s, ies or es to the verb
• I exercise daily.
• We go to work in the morning.
With the subjects: he, she, it or a name- add s, es or ies
• He exercises daily.
• She goes to work in the morning.
A verb has three main or basic forms
Present: This refers to something that is existing or happening now or happens routinely.
• I work out daily.
• She eats dinner at 10 pm.
• I talk to Peter once in a while.
Past: This form of a verb is used to indicate that something has already been completed.
• She ate dinner at 10 pm.
• I talked to Peter.
Past participle: It is used with the helping verb such as has, have or had.
 Have with I, you we and they (present)
 Has with He, she, it or name (present)
• She has read the book.
• I have read the book.
 Had with I, you, we, they, he, she, it or name (past)
• They had read the book.
Present Participle: This is formed by adding -ing to the end of present verbs. It is used with forms of the verb to be, such as am, is, are, was, or were. This expresses an on-going action
• I am going to work right now.
 Am, is and are with present
 Was and were with the past
Infinitive: This form consists of the word “to” followed by a verb
 I need to see a doctor. (To see is an infinitive in the above sentence)
So these are the various forms of the verb in English, go ahead and use them in your sentences and make your English perfect. 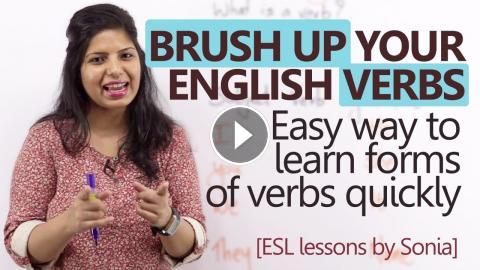