We had informed our viewers a few months ago that Vicky Kaushal is starring in Karan Johar’s upcoming horror production and the poster of the film was unveiled today. The franchise is called Bhoot and the part one is called Bhoot: Part One – The Haunted Ship.

The poster features Vicky and one can see his face being held by a ghost’s hand against a broken window. Vicky is seen screaming for help as the hand strangles him. The poster is creepy and we are hoping the movie to be a spine-chilling supernatural thriller.

Vicky shared the poster with his fans and along with it, he wrote, “Nothing haunts you more than reality. Presenting #Bhoot Part One - The Haunted Ship, directed by @Bps_91. In cinemas 15th November, 2019.”
Ram Gopal Varma owned the rights to the title Bhoot and his 2003 release Bhoot turned out to be a huge hit. However, the sequel Bhoot Returns, which released in 2012, opened to negative reviews. Karan reached out to RGV and he agreed to give the rights to the title to him.

The film revolves around a ship that lies static on a beach and has been shot in Alang, Gujarat, which boasts of world’s biggest ship-breaking yard.

The film also stars Bhumi Pednekar and is being helmed by debutant director Bhanu Pratap Singh. The first installment of the Bhoot franchise will release on November 15. 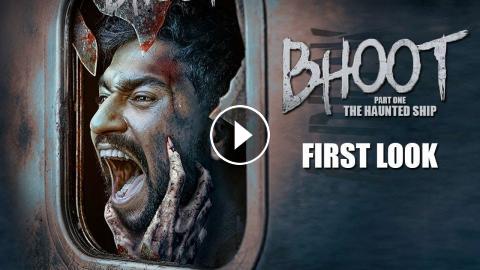 #BHOOT #VickyKaushal #BhumiPednekar We had informed our viewers a few months ago that Vicky Kaushal is starring in Karan Johar’s upcoming horror produ...