admin
The master-director Ashutosh Gowarikar talks about his upcoming magnum opus 'Mohenjo Daro'.There are seldomly seen filmmakers who introduce each and every crew member on the event of their film, and Ashu is one of them. In this Bollywood Hungama exclusive interview with Content Head Broadband Faridoon Shahryar, He beautifully explains why a director is nothing without his crew members. Ashutosh Gowarikar also opens up on the criticism he has been facing for the costumes and language of the film. Ashu opens up on the clash of the movie with Akshay Kumar's Rustom. He also talks highly of Hrithik Roshan and how he's keenly involved in the promotions. He talks in detail about how in such a limited budget the team tried to maximise the effect of VFX. His teaming up with A R Rehman has always proved to be melodious, be it Lagaan or Jodha Akbar and now in Mohenjo Daro. Ashu opens up on the music of the film. He then gets into a rapid fire mode and makes interesting comments about Shah Rukh Khan, Salman Khan, Hrithik Roshan, Tiger Shroff, Aamir Khan and a lot more. He answers few of the many questions asked by his fans from all over. He talks about his experience of working with Hrithik Roshan for the second time. He also reveals the scene that he feel will be the most important in the film. Must Watch!
Watch more Exclusive Celebrity Interviews right here
Like BollywoodHungama on Facebook:
Follow BollywoodHungama on Twitter:
Circle BollywoodHungama on G+: 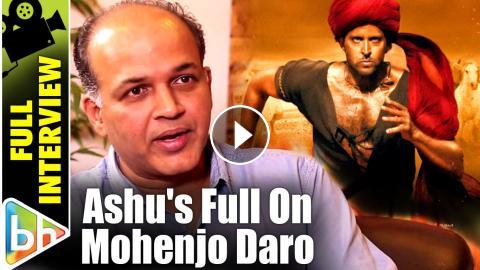 The master-director Ashutosh Gowarikar talks about his upcoming magnum opus 'Mohenjo Daro'.There are seldomly seen filmmakers who introduce each and e...