admin
DESCRIPTION: In this Bollywood Hungama exclusive interview with Content Head Broadband Faridoon Shahryar, Varun Dhawan and Kriti Sanon talk about their film 'Dilwale'. Both talk about the humongous response generated by the promos and feedback during promotions. Kriti tells how Varun is extremely caring while Varun reveals the fun on the sets thanks to the very tall Kriti. Varun makes it clear that his fans won't feel disappointed with the length of his role. He then shares interesting details about working with Shah Rukh Khan and the superstar's comic timing. Both speak highly of their co-star Kajol and then take up fan questions. Varun tells that he doesn't think he can reach the level of Salman Khan. He then shares interesting details about an emotional scene between him and Shah Rukh Khan in the film. He then talks about his future plans, why 'Shhuddhi' is on hold and why he'd like to very careful when trying to attempt serious, intense films a la 'Badlapur' in the near future. Kriti shares interesting detail about her next with director Dinesh Vijan, co-starring Sushant Singh Rajput. Lastly, both play a fun quiz and get into rapid fire mode, thereby raising loads of laughs. Don't miss!Watch more Exclusive Celebrity Interviews right here
Like BollywoodHungama on Facebook:
Follow BollywoodHungama on Twitter:
Circle BollywoodHungama on G+: 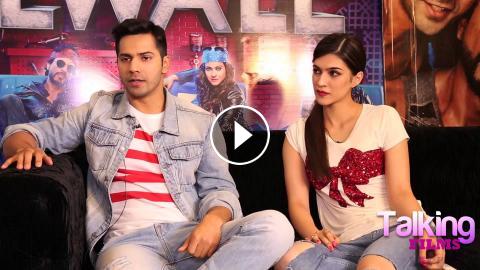