admin
Head of European Furniture Paul Gallois on two wildly different yet equally beautiful 18th-century desks — one made in France, the other in Germany — and the tantalising possibility that their royal owners may have written to each other from them.
The Louis XVI ormolu-mounted writing desk shown below was conceived in around 1785 by Jean-Henri Riesener (1734-1806), arguably the most celebrated cabinet-maker of the 18th century. It was commissioned for Queen Marie-Antoinette of France for her personal use at the Petit Trianon, her private residence at the Château de Versailles.
The circular mark ‘Garde-Meuble de la Reine’, with interlaced monogram ‘MA’ and a crowned ‘CT’, branded to the desk’s underside, is evidence of this royal provenance. From 1784, the monogram ‘MA’ was branded or painted onto the queen’s personal furniture delivered to the Petit Trianon, then known as the château de Trianon. Approximately 25 pieces branded ‘CT’ and ‘Garde-Meuble de la Reine’ are known, of which seven are desks.
The sober architectural lines and elegant proportions of the desk, which is embellished with delicately chased and gilded ormolu mounts, are characteristic of Marie-Antoinette’s taste. They’re also emblematic of the Neoclassical style popular in Europe throughout the 1780s, the decade in which Riesener completed many of his most important commissions for his royal patron.
Find out more:
--
Subscribe to Christie's YouTube:
Sign up to Christie's Weekly:
Follow Christie's on:
Facebook:
Twitter:
Instagram:
Pinterest: 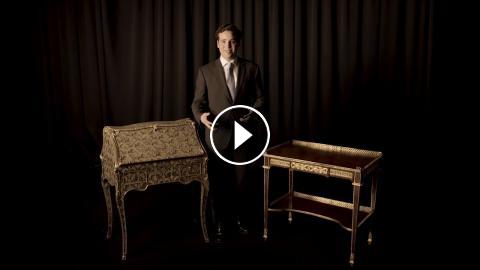 Head of European Furniture Paul Gallois on two wildly different yet equally beautiful 18th-century desks — one made in France, the other in Germany — ...