Added 1 week ago by admin
3 Views
Archana is forced to be ferocious in defence of Selvam when Vasu hits a stunned Selvam left, right and center. Brave Archana rises in defence of Selvam who is too shocked to react! Episode premieres Tomorrow at 8:00 pm IST. Click the 'Set reminder' button to get notified for the premiere!
After a gap of 11 years, meet Archana Selvam and their families again everyday at 8 pm, Monday to Saturday, exclusively on VikatanTV YouTube channel. #VikatanPrimeTime #ThirumathiSelvam #ThirumathiSelvamIsBack - not re-telecast on TV but on YouTube, back at the same time as it was on SUN TV, exactly 11 years ago.
The story of Archana Selvam that took Tamil television audience by storm, and got remade in 4 Indian languages (Telugu, Kannada, Malayalam & Hindi), comes back to its Tamil audience - this time not on TV, but exclusively on YouTube. Why Thirumathi Selvam to launch #20YearsOfVikatanTelevistas ? Barely 10 years since inception, Vikatan Televistas broke a myth of TV that South Indian content cannot entertain the Hindi heartland, and Thirumathi Selvam made it possible. Thirumathi Selvam, in its original and remade forms, was entertaining audience all across India in 5 languages concurrently between 7 pm to 11 pm during the period 2008 to 2010!
20 years back, in the first week of November 1998, Vikatan Televistas started their journey with a weekly serial Akshaya on SUN TV, every Thursday at 9 pm. It has been 20 years of entertaining you - our audience. We thank you for your support, love and criticism all these years. #20YearsOfVikatanTelevistas
Thirumathi Selvam is a Tamil drama serial written and directed by S Kumaran and produced by Vikatan Televistas. It was premiered on 5 November 2007 and was aired Monday through Friday on Sun TV. The show had Sanjeev (as Selvam) and Abitha (as Archana) playing the lead roles with Vadivukkarasi (Sivakami, Archana’s mother) and others forming the supporting cast. The serial had the highest Television Rating Point for Tamil serials. The story revolved around the lead character Selvam and showed how his good qualities, hard work and love for his wife Archana made him reach great heights.
Subscribe: Vikatan App - 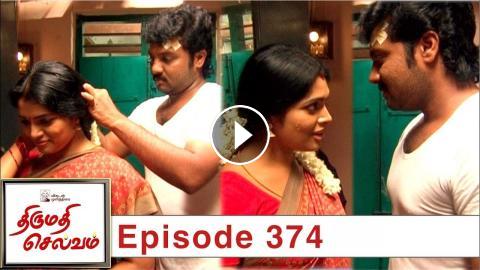