admin
#SunilGrover in an exclusive interview with Bollywood Hungama’s Faridoon Shahryar talks about film #Bharat, his role in it, his funny moments with #SalmanKhan and #KatrinaKaif. He tells how Salman Khan made him comfortable in scenes. He also says that Salman is very kind and that he motivates you. He plays an epic quiz- How well does Sunil Grover know #SalmanKhan & #KatrinaKaif. He answers some really interesting questions about them. He also talks about his relationship with #KapilSharma. He tells the reason why he didn't join #SalmanKhan & #KatrinaKaif on his show for #Bharat promotions. He also comments on plans of reuniting with Kapil Sharma. He further plays an epic rapid fire and answers some really funny questions. He answers questions about #ShahRukhKhan, #AliaBhatt, #DeepikaPadukone, #SalmanKhan. He answers some interesting twitter fan questions. He talks about his next projects after #Bharat and shares his thoughts on #KapilSharma’s bad phase and his relationship with him. He also tells why he enjoys live shows. He further talks about his character Vilayati in #Bharat. Don’t Miss!
Also, do not forget to subscribe to Bollywood Hungama:
Watch more Exclusive Celebrity Interviews right here
Like Bollywood Hungama on Facebook:
Follow Bollywood Hungama on Twitter:
Circle Bollywood Hungama on G+: 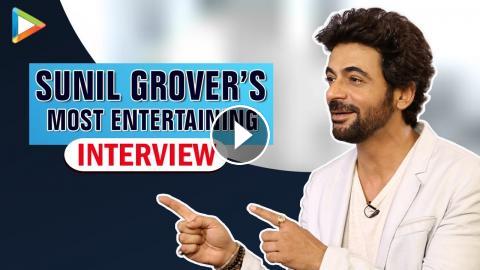 #SunilGrover in an exclusive interview with Bollywood Hungama’s Faridoon Shahryar talks about film #Bharat, his role in it, his funny moments with #Sa...