admin
‘I look back on my life and I can’t believe I did all those things,’ comments Terry O’Neill, the British photographer who became renowned for his candid shots of musicians including Elton John, David Bowie and the Rolling Stones, and Hollywood greats from Frank Sinatra to Fred Astaire.
O’Neill came to photography through unconventional means: ‘My mother wanted me to be a priest, but the priest who was teaching said that I asked too many questions,’ he explains. When he discovered British Airways flew to New York, O’Neill saw the chance to pursue his dream of becoming an international jazz drummer. He became an air steward, taking a job in the photographic unit.
Find out more at
‘That was the start of my photographic career,’ says O’Neill. ‘I went from England and got slung into the centre of Hollywood.’ Early subjects included Frank Sinatra, who allowed O’Neill to follow him as he pleased. ‘I could go anywhere with him — it was fantastic. When I got back to England I realised what a gift he’d given me. He’d totally let me into his life.’
Among O’Neill’s most famous images was a shot of actress Faye Dunaway, captured elegantly dazed by the swimming pool of the Beverly Hills Hotel, the morning after her Oscar win. ‘She went to bed at 3.30 and got up at 6 o’clock to do this picture,’ he recalls. Dunaway’s Oscar glints from the breakfast table, the morning’s press scattered at her feet.
The cameras behind O’Neill’s iconic shots were always Leicas, the German brand that was also a favourite of photographers including Henri Cartier-Bresson, Robert Frank and Garry Winograd. ‘The Leica was very important to me,’ says O’Neill. ‘It was a fabulous camera to use — quick as a flash, anywhere, any time.’
O’Neill’s love of Leica led him to establish an extensive collection, which grew to become a ‘family tree’ of the brand’s 107 principal cameras, displayed on a custom-built display unit, by model and date of production. The result is a history of the brand from 1914 to 2014, from pre-production models to the screw-fit Leica series, M-series, R-series, and later digital cameras.
The cameras are the tools of an exceptional career, having helped to create what O’Neill describes as his ‘life in pictures.’ For the photographer, that personal outlook is vital for producing his best work ‘You must like the people, that’s the key thing to any job,’ the photographer. ‘For me it comes through in the pictures; that’s the difference between a good picture and a bad picture. 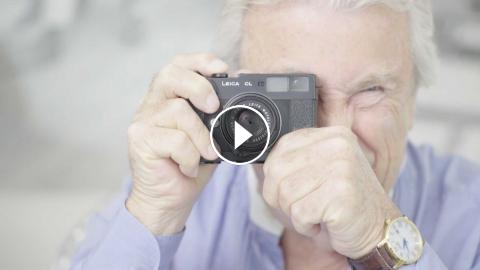 ‘I look back on my life and I can’t believe I did all those things,’ comments Terry O’Neill, the British photographer who became renowned for his cand...