ava
Presenting Animated Cartoon Kids Movie "Shaheed Bhagat Singh Full Movie". Play it to your kids to teach them about this freedom fighter.

Bhagat Singh was an Indian socialist considered to be one of the most influential revolutionaries of the Indian independence movement. He is often referred to as "Shaheed Bhagat Singh", the word "Shaheed" meaning "martyr" in a number of Indian languages. Born into a Sikh family which had earlier been involved in revolutionary activities against the British Raj, as a teenager Singh studied European revolutionary movements and was attracted to anarchist and Marxist ideologies. He became involved in numerous revolutionary organisations, and quickly rose through the ranks of the Hindustan Republican Association (HRA) to become one of its main leaders, eventually changing its name to the Hindustan Socialist Republican Association (HSRA) in 1928.

To make your kids more creative, innovative & intelligent Click on the link below :-
https://www.youtube.com/user/KidsFountain 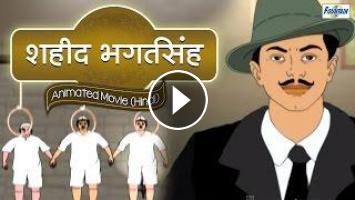 Presenting Animated Cartoon Kids Movie "Shaheed Bhagat Singh Full Movie". Play it to your kids to teach them about this freedom fighter. Bha...