admin
At the teaser launch of Sanju, present were Ranbir Kapoor, Rajkumar Hirani, Vidhu Vinod Chopra and others. Ranbir says Rajkumar Hirani is the greatest director alive. Must Watch!
Ranbir Kapoor (born 28 September 1982) is an Indian actor and film producer. Through his career in Hindi films, he has become one of the most popular celebrities and one of the highest-paid actors in India. He is the recipient of several awards, including five Filmfare Awards.
Vidhu Vinod Chopra (born September 5, 1952) is an Indian film director, screenwriter and producer. Parinda, 1942: A Love Story , Munna Bhai film series (Munna Bhai M.B.B.S. and Lage Raho Munna Bhai) and 3 Idiots are some of his highly popular films. He is the founder of Vinod Chopra Films.
Rajkumar Hirani (born 20 November 1962) is an Indian film director, He is widely regarded as the most successful and one of the most critically acclaimed filmmakers of the 21st century Indian cinema. Hirani is known for directing Hindi films, including Munna Bhai M.B.B.S (2003), Lage Raho Munnabhai (2006), 3 Idiots (2009) and PK (2014). All his films have been huge commercial successes, won several awards including the National awards and has often been regarded by the media and audiences as some of the most path-breaking films in the history of Indian cinema.
Also, do not forget to subscribe to Bollywood Hungama:
Watch more Exclusive Celebrity Interviews right here
Like BollywoodHungama on Facebook:
Follow BollywoodHungama on Twitter:
Circle BollywoodHungama on G+: 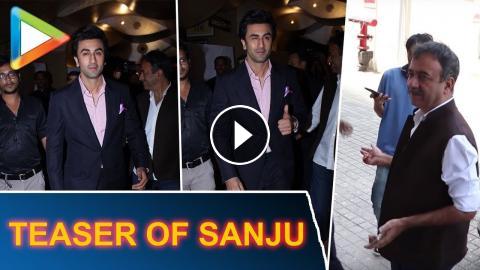 At the teaser launch of Sanju, present were Ranbir Kapoor, Rajkumar Hirani, Vidhu Vinod Chopra and others. Ranbir says Rajkumar Hirani is the greatest...