Three amateur thieves plot to kidnap a wealthy Chettiar’s (Santhana Bharathy's) son from the boy's school. They do a trial run. However on the eve of the kidnap, the guy whose job is to operate a crane in this plan is hospitalized. The services of Avinasi aka Mumbai Xpress (Kamal Hassan) brother of Kovai Sarala, a deaf stunt man performing daredevil bike acts is roped in. Twists and turns take place where the other two gang members are hurt and invariably our Mumbai Xpress is left to perform the task all by himself. He kidnaps a wrong boy Daddu (Hardhik), the illegitimate son of Ahalya (Manisha Koirala) and police officer Rao (Nassar) but manages to get a huge ransom from Chettiar by default. Ahalaya wants either Rao’s or Chettiar’s money which Avinasi is holding, whereas Avinasi is in love and wants to be that protective person. Rao appoints Chettiar to handle the ransom and what follows is a series of mix-ups. 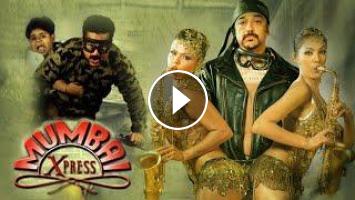