admin
Love By Chance - Episode 25 Synopsis:
The problem faced often by today's generation is that they are highly confused. No one knows for sure as to what they really want or want to do.

No one can ever be so sure and so particular about each and every decision that they make.Trisha knows exactly what she wants, when she wants it, how she wants it and will leave no stone un- turned to make sure she gets it.

Her over particular nature, always gets her questioning looks from the people that are around her and she usually always ends up being alone. But that doesn't bother her because she is how she is.

One evening at her friend's party, Trisha meets Sanyog, a guy opposite from her in every aspect. Where Trisha is extremely specific about everything she does, Sanyog is a very "kuch bhi chalega" kind of a guy. An extremely laid back and cool guy. Sanyog is trying to get to know this uptight girl and decides to do so in a game of truth and dare.

It's Sanyog's turn and as usual his response to whether he wants to pick truth or dare is - kuch bhi chalega yaar.

All the people at the party, who anyways have a bone to pick with Trisha, dare Sanyog to get her drunk. Trisha who initially isn't keen on this dare ultimately agrees because she realizes that otherwise she'll be completely left out.

Sanyog and Trisha then have a shots downing competition and Trisha ultimately passes out with all that alcohol.

Meanwhile her friends at the party decide to prank Trisha and make Sanyog tell her that they both had an intimate night and Trisha totally came on to him in her drunk state.

When Trisha wakes up and hears all this from Sanyog and realizes she's wearing his shirt, she freaks out and in order to save her image, she tells everyone that the reason she did all that was because she fell in love with him the moment she saw him.

Everyone including Sanyog is stunned. He doesn't know how to react and and when Trisha tells him that now they are dating, he is quite dumbfounded.

Trisha on the other hand goes home and panics about what she just done. She tells herself that to get out of this mess, she will make a list of how she can make Sanyog miserable and make him break up with her.

And so begins a comical journey of Trisha trying to make Sanyog miserable but he in turns, agrees with whatever she says and is quite chilled out even when she is super harsh on him.

Trisha starts to let her guard down soon and realizes that actually Sanyog is a rare find and as she is about to get close to him, her friends meet her at a party and tell her that nothing actually happened between her and Sanyog and him and that it was all of a prank.

Trisha is infuriated. She slaps Sanyog and walks out on him and ignores him when he tries to get in touch with her.

Sanyog lands up at her place and Trisha finally melts and confesses that she too was purposely trying to make his life miserable and he forgives her.

This way, the two people who are complete opposite of one another in every aspect decide to give their love a chance !
Watch the full episode to know what happens next! Don't forget to LIKE, SHARE, COMMENT!
For more bindass Play ►
Subscribe to now for the latest updates on Bindass
Keep up with bindass on:
FACEBOOK►
TWITTER►
GOOGLE+►
INSTAGRAM►
Popular shows available on bindass:-
‘Pyaar Ka The End’: 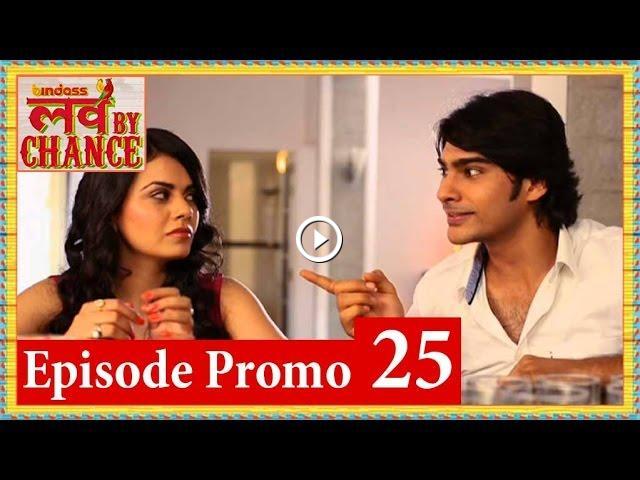 Love By Chance - Episode 25 Synopsis:The problem faced often by today's generation is that they are highly confused. No one knows for sure as to what ...