admin
In this Bollywood Hungama exclusive interview with Content Head Broadband Faridoon Shahryar, Kiara Advani talks about her film 'M.S.Dhoni - The Untold Story'. Kiara Advani talks about her role of portraying Dhoni's wife, Sakshi and says that everything is quite authentic in the film.She talks in detail about her character of Sakshi Dhoni and how it was a challenging role for her. She also hints at her glamorous avatar in her next 'Machine' with Abbas-Mustan. Kiara Advani gets into a rapid fire mode and makes some interesting comments on Varun Dhawan, Neeraj Pandey, Sakshi Dhoni, M.S Dhoni, Virat Kohli, Sushant Singh Rajput and a lot more. She also talks about her forthcoming film with Abbas Mustan which is titled as 'Machine'. Kiara talks about her bonding with Disha Patani. Kiara also talks about the reviews which they are getting for Dhoni's biopic. Must Watch!
Watch more Exclusive Celebrity Interviews right here
Like BollywoodHungama on Facebook:
Follow BollywoodHungama on Twitter:
Circle BollywoodHungama on G+: 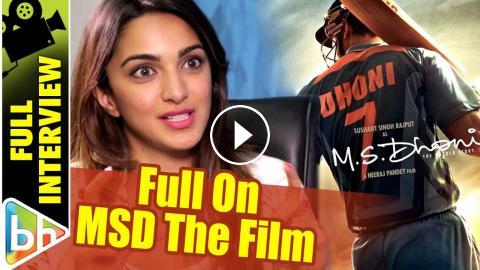