☀ ABOUT THIS COSMIC CHAKRA CHANTS SERIES
Recently NASA's Voyager space ship captured sounds from Interstellar Space, Way beyond solar system, the sounds of the deep Universe. We extracted individual Chakras frequencies and using audio synthesis converted them to music. In this series we mixed them with the Chantings of the Seed Mantra of the Chakra The Result are mind calming and healing vibrations and rumblings straight from Universe.

Crown Chakra also called Sahasrara is a bridge to the cosmos. The Crown Chakra is a door of universal energy and conscience; through it you can reach a higher state of awareness. Sahasrara leads you beyond materialism to the true nature of life which is abundant in joy, purpose and curiosity. The guidance begins outside yourself, but during this process you will find inner direction.

How to Meditate for Awakening Crown Chakra?

To meditate on the crown chakra follow the usual relaxing technique below:

sit comfortably, and make sure not to be disturbed for at least ten minutes. Start breathing slowly, and deeply. Feel your body parts relax as you breathe, let your feet relax, let your legs, your hips, and torso relax. Let this wave of relaxation move up your spinal cord relaxing all muscle groups in your back, feel the relaxation wave move your abdomen area, and then slowly going up your chest relaxing all muscles, and organs in that area. Allow the wave of relaxation to slowly move to your shoulders, neck, and head, then feel it on your face, let it relax all muscles on your face, feel this wave of relaxation taking over your whole body until you are completely relaxed.

Location: Top of the head

Parts of the body: This Chakra is associated with the top of the head, the brain, and the entire nervous system

Sense: Sense of empathy, unity, experiencing another person's experience as if you were inside them, being them.

Consciousness: The Crown Chakra represents that part of our consciousness concerned with perceptions of unity or separation. Just as the Root Chakra showed our connection with Mother Earth, this chakra shows our relationship with Our Father in Heaven. It represents our connection with our biological father, which becomes the model for our relationship with authority, and ultimately, with God. It's the level of the soul.

When one experiences a sense of separation from their father, they close the crown chakra, and experience a sense of isolation and aloneness, as if they are in a shell, and having difficulty with feeling contact with those around them. Thought processes tend to justify and maintain the sense of aloneness.

The view from this chakra includes seeing one's Self as the single consciousness creating all, and paradoxically, thus connected to all, like a dreamer dreaming a dream and realizing that all that is perceived is just an extension of their own consciousness.

Element: Inner Light, which is what one experiences when they are in the deepest part of their being, as a point of consciousness glowing with intelligence.

Also called White Light. Metaphysically, this is considered the most subtle element of which the entire physical universe is created. 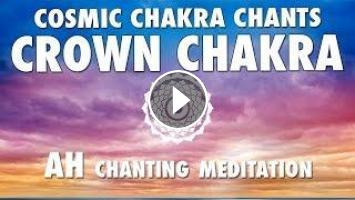