admin
A highlight of the Impressionist & Modern Art Evening Sale on 16 November, Meule is to be exhibited in Hong Kong and London before going on show at Christie’s in New York.
Find out more at
Executed over the winter of 1890-1891, Claude Monet’s Grainstack series was the most challenging and revolutionary endeavour the artist, then aged 50, had ever undertaken.
Monet had experimented during the later 1880s with depicting a single landscape subject under different lighting and weather conditions, but he had never conceived of painting so many pictures — some 25 canvases in all — that were differentiated almost entirely through colour, touch and atmospheric effect.
The artist had only to walk out of his house in rural Giverny to find his motif. Setting up his easel near the boundary wall of his garden, he looked west or southwest across the field known as the Clos Morin towards the hills on the far bank of the Seine. There, following the harvest, local farmers piled hundreds of sheaves of bound wheat stalks into tightly packed stacks with thatched conical roofs. These grainstacks represented the fruits of the local farmers’ labours and their hopes for the future.
Claude Monet (1840-1926), Meule, 1891. 28⅝ x 36¼ in (72.7 x 92.1 cm). Estimate upon request. This work is offered in the Impressionist & Modern Art Evening Sale on 16 November at Christie’s in New York
Monet and his art dealer Durand-Ruel exhibited 15 Meules in May 1891 to great acclaim, and by the close of the year, all but two of the Grainstacks had left the artist’s studio.
A highlight of Christie’s Impressionist & Modern Art Evening Sale on 16 November in New York, Meule (1891) is among the most formally adventurous of all the Grainstacks. It is also one of five paintings from the series that the American-based dealer Knoedler selected from the artist in September 1891, and the only one from that group to still be in private hands.
The majority of the Grainstacks series are now housed in major art museums around the world, including the Musée d’Orsay, The Metropolitan Museum of Art, the Art Institute of Chicago and the National Gallery of Scotland.
Meule will be exhibited for the first time in Asia at Christie’s Hong Kong (17-19 October), whereupon it will be toured to Christie’s London (24-25 October) before going on display to the public at Christie’s Rockefeller Center galleries in New York from 5 November.
Prices for exceptional examples of Monet’s work have soared in recent years, driven by demand from collectors worldwide for museum-quality works by the greatest master of the Impressionist period. The top price at auction for any Monet painting is $80.4 million for Le Bassin aux Nympheas from 1919, sold at Christie’s London in June 2008 against an estimate of $35-47 million.
‘We have been extremely aware of the growing passion for classic Impressionist paintings among our leading Asian collectors,’ remarked Jussi Pylkkänen, Christie’s Global President, ‘and this work is simply a masterpiece by Monet, the genius of plein air painting.’ 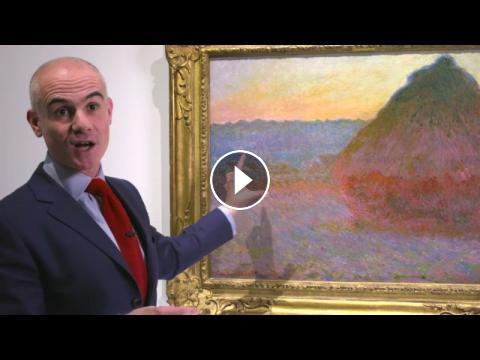 A highlight of the Impressionist & Modern Art Evening Sale on 16 November, Meule is to be exhibited in Hong Kong and London before going on show at Ch...