Creek Crocodile Commando are the elite commando force of BSF. It is Rann of Kutch (an extensive salt marsh of western India and southeast Pakistan between the Gulf of Kutch and the Indus River delta. It was the scene of major border disputes in 1965 and 1971). Creek (Gujarat): In order to thwart landing of terrorists through the sea route, BSF has formed its first commando unit—Creek Crocodiles—to man the hostile creek area where India shares a border with Pakistan.

Creeks are a very hostile terrain, constituting numerous raised grounds having mangroves and a network of water channels which are quite shallow where all movements are tide dependent.

"Three things kept in in mind while selecting cadets for the commando including swimming and marine diving performance, firing abilities and endurance to work in the rough creek,".

The Crocodile units have 42 commandos at present[when?] and they are undergoing vigorous training. 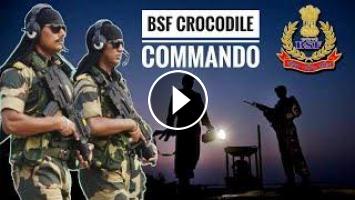