admin
Max Carter, Christie's Head of Impressionist and Modern Art in New York, tells the story of a career-defining Futurist work, made just two years before the artist’s tragic death.
On 11 April 1912, the Italian artist Umberto Boccioni (1882-1916) published his Technical Manifesto of Futurist Sculpture. He hadn’t yet fully committed himself to being a sculptor and yet, by the end of the following year, he had sculpted a work so complex and forward-thinking that it is now considered to be a cornerstone of Futurism, as well as his masterpiece.
Boccioni’s brainwave was to break down blocks of movement and convert them into curves that extended past the shape of a human body, before reassembling them as a forward-marching figure. As the artist himself stated, Unique Forms of Continuity in Space was a ‘synthetic continuity’ of motion; an abstract image of man striding boldly and continuously towards a brave new world, in every direction at once.
Find out more:
--
Subscribe to Christie's YouTube:
Sign up to Christie's Weekly:
Follow Christie's on:
Facebook:
Twitter:
Instagram:
Pinterest: 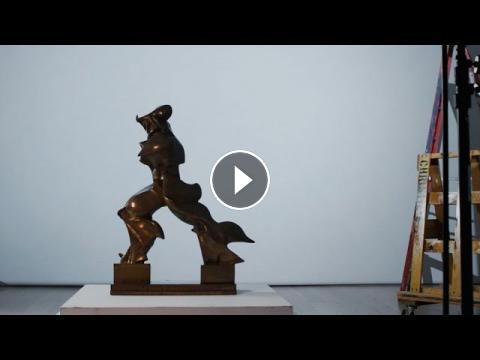