In the last episode, we explored how the Sikh Gurus were being defined in modern terminology. The Sikh Gurus are being portrayed in minimal light, connecting them to a specific land or state by saying they are the protectors of Hindus. Whenever we see preaching of this kind, it further proves just how meticulously the ideological siege of the Sikhs has been carried out.

In world history, all movements are led by a communities educated leaders as they are the ones who can plan things accordingly. But the Sikh movement that started after 1984 was not led by the educated leaders, with most of them either sided with the government or were utterly silent on the matter. So now you’re probably thinking, with what strength did those youngsters fight a movement for so long in Punjab?

If you see those people who were fighting and the emotion that they had. They knew nothing else. All they knew was that their Guru was attacked, their Gurdwara was attacked, and their life is illegitimate if we cannot protect our Guru.

Within nationalistic movements, whether that's in Armenia or Germany or anywhere else in the world, the intellectual section of a community tends to come forward because an average person wouldn't know about the terms and conditions of a movement regarding nationalism or community freedom. If you look at 1889, the French revolution, it was all done by intellectuals. The workers supported them, but scholars lead the revolution.

The Sikhs scholars did not act this way on purpose. It's not like they planned to do this; it was just how they were programmed to think. That's the way modern times work; they program you to think a certain way. They have changed the definition of education, to where being educated is based on whether or not you have a PhD or if you've been to university. From childhood, Sant Jarnail Singh had obtained such a high level of knowledge. But to these people, it had no worth. To learn and understand Gurbani, to regularly explain Gurbani and live according to Gurbani, there is no value in this to the scholars.

The difference between nations states and olden states is that olden states didn't have any boundaries or rules. So depending on the amount of power you had, you could increase your kingdom. But the modern states that started to appear around the 17th century began to establish rules and regulations, ones that could remove monarchies and lordships. So what they started to do is separate territories into nations and defined nations as those living in a particular geographical region with one language, one culture that has economic ties with one another, etc.

During colonialism, when they would invade other countries, they had a considerable justification for it. They would say that “we have become nations. We are advanced. We are culturally advanced. But those people from Asia and Africa are way back in the Middle Ages. So they are not capable of ruling. So we are going to make them civilised again.” So colonialism was portrayed as a colonisation mission known as “The white man's burden.”

When Captain James Cook went to Australia for the first time, the report he sent back was that these people are not humans “these aboriginals are animals.” So those people you don't even accept as human beings treat them however you want.

Professor Paul Brass has researched many ethnic groups within India; he is a very knowledgeable professor and the head of the University of Seattle's history department. But, he said, “out of all of the minorities in India, Sikhs are the only ones who can call themselves a community. Their unique language, their ideological knowledge and awareness, their ability to remain steadfast to their religion, their self-identity.”

To the British, the Brahmanical system was almost enchanting for them, that without striking anyone, they had made everyone believe that they were inferior for thousands of years. So within India, the colonial knowledge that they gained was all done with the help of the brahmins.

Now, why does the RSS continuously bring you this concept that everyone who lives in India is a Hindu? Is this word in any of their historical Sanatan granths? Or is this propaganda being used to annoy and insight minorities?

For a more in-depth explanation of this ideological siege that befell the Sikhs, please watch our documentary.

For feedback & Any questions, please feel free to email on [email protected]

To Buy the original book check the link below:

All Rights Reseverd by : Akaal Channel 2021 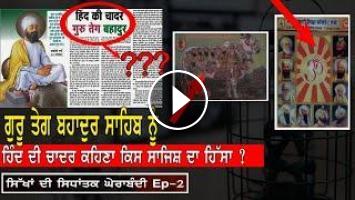