Starring Suriya Trisha. it turned out to be a Hit at the box office.

Gautham (Suriya) and Kannan (Nandha) are close friends from childhood days. Gautham owns a restaurant while Kannan works as a sales executive in a firm. Kannan is in love with Maha (Neha Pendse) while Gautham has no interest towards girls and prefers to be single despite his family members trying to get him married. Sandhya (Trisha) is the relative of Kannan and their family members plan to get them married. Kannan is scared of his father and he is unable to inform about his love. So he requests Gautham to meet Sandhya and inform about the love between Kannan and Maha.

Gautham agrees and informs Sandhya about Kannan’s love with Maha. Sandhya also says that even she is not interested in the marriage proposal and instead she prefers to get married to someone like Gautham. Hearing this, Gautham is shocked and also confused.

Kannan and Sandhya’s parents understand that neither Kannan nor Sandhya are interested in marriage and cancels the wedding plans between them. Meanwhile, Gautham develops affection towards Sandhya. Gautham receives frequent phone calls and he believes it to be from Sandhya. Gautham also gets gifts which he also believes to be sent by Sandhya.

Maha’s father gets angry knowing about her love and engages a few thugs to beat up Kannan. Kannan is injured which angers Gautham. He smashes all those thugs and scolds Maha’s father for involving in such activities. Maha’s father realizes his mistake and apologizes. Kannan and Maha’s wedding is fixed.

One day, Sandhya calls Gautham to a restaurant. Gautham believes that she has called to convey her love but is shocked when she introduces Aravind as her lover. She also says that even Aravind is like Gautham who was not interested in girls but somehow is convinced by Sandhya. Gautham starts worrying and is confused about the happenings as he believed the phone calls and gifts were from Sandhya.

On the day of Kannan and Maha’s wedding, Gautham walks alone in the street thinking about his love failure. Suddenly a car comes in front of him and it is Laila. She walks towards Gautham and proposes her love. A small flashback is shown where Laila and Gautham were college mates and Laila was in love with Gautham. But Gautham did not reciprocate and avoided her during college.

On the last of college, Laila told Gautham that she will keep following him always and will never forget him. As she told, she kept following Gautham and it was her who kept calling Gautham and sent him frequent gifts which Gautham misunderstood to be from Sandhya. Gautham realizes Laila’s true love and accepts it. The movie ends with both leaving together in the car. 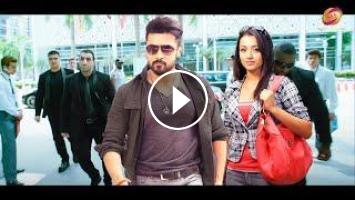