Bhimashankar Temple is a Jyotirlinga shrine located 50 km northwest of Khed, near Pune, in India. It is located 127 km from Shivaji Nagar (Pune) in the Ghat region of the Sahyadri hills. Bhimashankar is also the source of the river Bhima, which flows southeast and merges with the Krishna river near Raichur.
Once Brahma (the Hindu God of creation) and Vishnu (the Hindu God of saving) had an argument in terms of supremacy of creation. To test them, Shiva pierced the three worlds as a huge endless pillar of light, the jyotirlinga. Vishnu and Brahma split their ways to downwards and upwards respectively to find the end of the light in either directions. Brahma lied that he found out the end, while Vishnu conceded his defeat. Shiva appeared as a second pillar of light and cursed Brahma that he would have no place in ceremonies while Vishnu would be worshiped till the end of eternity. The jyotirlinga is the supreme part less reality, out of which Shiva partly appears. The jyothirlinga shrines, thus are places where Shiva appeared as a fiery column of light.
If You like the video don't forget to share with others & also share your views.
Stay connected with us!!!
► Subscribe: http://www.youtube.com/tseriesbhakti
► Like us on Facebook: https://www.facebook.com/BhaktiSagarTseries/
► Follow us on Twitter: https://twitter.com/tseriesbhakti 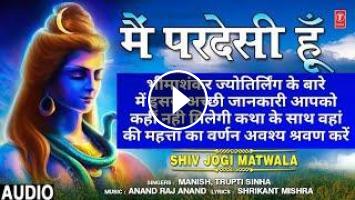